Its geology is based on igneous and metamorphic rocks which shows the influence of the Palestina's fault due to the presence of stretch marks in the fault and minerals lineation. The big movement of material in the zone are associated to a fracture a cizalla zone where its possible to see folds zone.

In the area of the Palestinian fault are mainly metamorphic and igneous rocks. These rocks mainly belong to the "Cajamarca Series" complex, which comprises a varied amount of shale and also contains lower amounts of quartzite that were intruded by dykes; in general terms the degree of metamorphism is considered low to medium in green schists. These metamorphic rocks are essentially affected by regional metamorphism and some by dynamic metamorphism. In addition to that, due to the deformation of the fault, many allochthonous materials are presented. These materials are composed mainly of rocks such as marble, feldspathic gneiss, diorite, gabros, cretaceous slates among others. The extreme south presents fisural volcanism, from Ruiz to Quindío.

The Palestina's fault is associated to minor faults which crosses it obliquely, for instance San Juan's fault and El Placer. As it is a stike fault, its biggest efforts comes from horizontal compressive forces.

the fault affects substantially metamorphic and igneous rocks, Precambrian rocks and the Cretaceous, also follows an approximate N 5 ° E course and affects Proterozoic metamorphic rocks and Mesozoic intrusive rocks. It proceeds in a north - south direction, aligning the River The volcano in a southerly direction until it meets the San Bartolomé River, which dissects almost perpendicular to the block on the eastern side corresponding to the Metamorphic Complex of San Lucas, represented by gneisses, quartz - feldspathic.

One of the model cross section

Section 7 show the best way on how the Palestinas fault affects the zone: 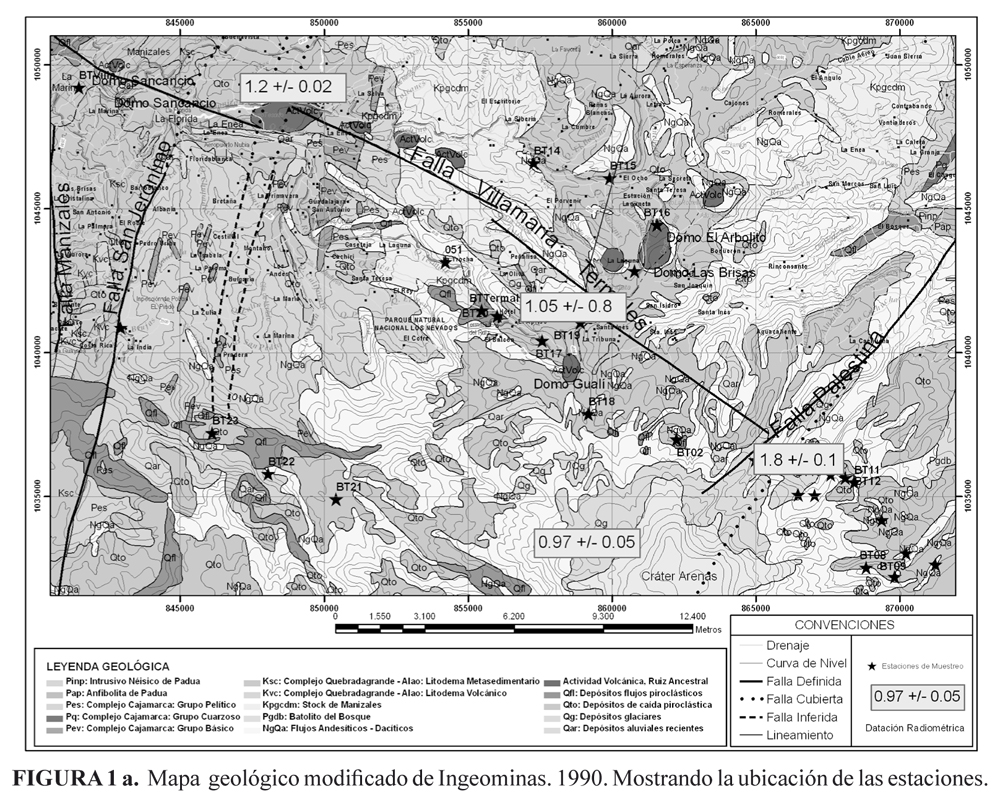